Jim Griffin "The Ranger & The Cleric" 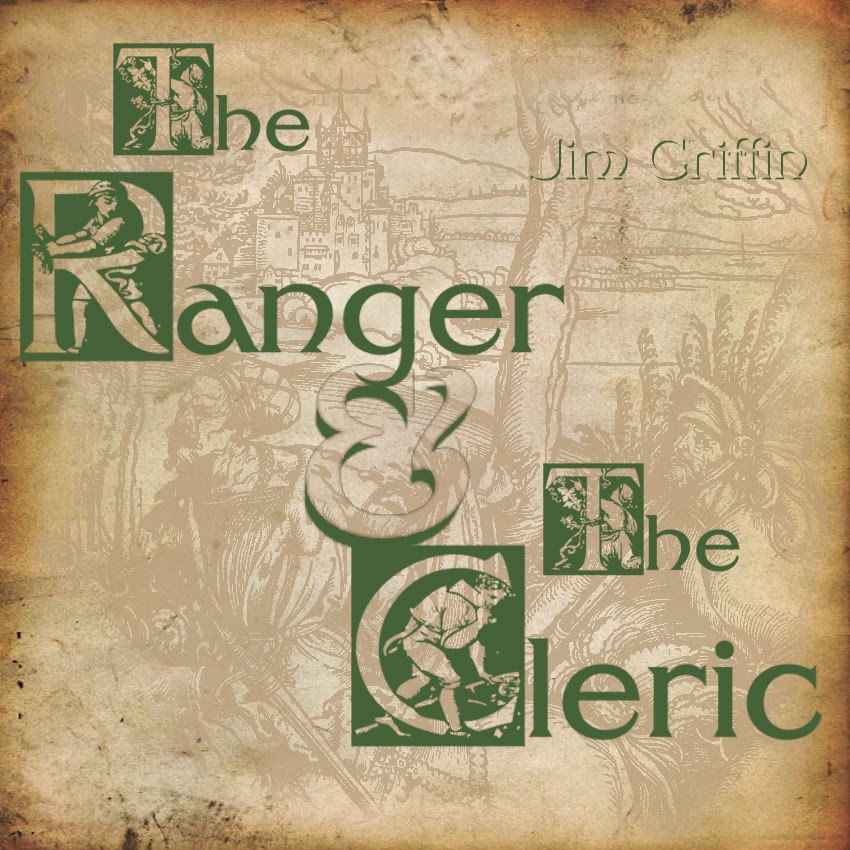 Now here is something very curious indeed. A literal one man band, Jim Griffin’s 'The Ranger And The Cleric' takes an obvious love of progressive and conceptual rock and turns in what may well be one of the albums of the year. Inspired by the work of Albrecht Durer, H.P. Lovecraft, Gary Cygax, Carl Sagan and Arthur C. Clarke and taking as its narrative a medieval story-cycle, this is an album that mines its own deep well of personal inspirational and ambition. Indeed, this is a visionary work that, although it nods and doffs its cap towards its musical influences, is still quite unlike anything else.

A concept album split into ten movements or segments, ‘The Ranger And The Cleric’ begins with 'Thoughts Combine' a spoken word intro hinting at forces both unknown and supernatural before an array of acoustic and treated guitars weave, wax and wane over each other in a veritable tapestry of sound. Double tracked electric guitar intertwines over finely wrung solos and an exquisite fingerpicking, recalling the Mike Oldfield of ‘Hergest Ridge’ or ‘Ommadawn’; it is that good. Merging into the title track, Griffin recounts the tale of both protagonists and the tale begins. At once melancholy, timeless and epic, there are heavy, unashamed hints of prog and subtle suggestions of folk but this album is also something quite unique with its own particular sound. Entirely the work of Griffin alone playing every instrument, this is an intricate but expansive piece of music; vocal harmonies, time signature changes and sound effects abound, easily suggesting the work of some 7 piece prog supergroup (imagine The Strawbs fronted by Porcupine Tree’s Steven Wilson).

Jousting guitars herald the ominous 'The Visions of the Prophet', soaring and repeating over the hum of vintage synths. The sound is massive and recalls the ‘sturm und drang’ of Jeff Wayne's classic prog musical ‘War of the Worlds’ in its intensity. Next, the interplay between delicate, hushed tones and the wail of electric guitar maelstrom breaks into ‘In A Single Word They Were Bound To Begin And Never End’ which continues the Ranger’s tale, blistering guitar work seguing between verses. The piece is complex, widescreen and hugely innovative; echoes of Robert Fripp's virtuoso discordance, Peter Hamill's pointed harmonies and Steve Hackett's very English sense of melody are all hinted at as the song builds to a towering and mind melting crescendo. All goes quiet and the sound of a cassette being inserted and played on an old tape deck begins 'Gentle Deeds to Charity’, a recording of sombre arpeggios leading into an acoustic refrain of great beauty and hushed grandeur. 'Tellings' follows, its Floydian melodies utterly otherworldly; in fact the whole album acts as a conduit to another time, another land. Emotive, evocative and ever so slightly cosmic this is headphones on and lights out music. Bells chime and the guitar becomes more frantic, tense and unsettling until we once again hear the sound of a cassette being pressed to play and the tape recording returns.

Next, 'Retellings' pensive acoustics are underlined by layers of electric guitar wails and howls, curious side effects merging with hushed percussion before the song finally segues into subsequent track 'Ancient Memories From Beneath'. Emerging gently, this understated but ambitious piece builds and layers from quiet contemplation to full on psych attack, replaying the doom laden motif of the album before drums and flanged guitar lead back into the earlier delicate splendour. To end, the drums return along with deranged, fuzzed out guitar as multi tracks swirl and fade in a psychedelic storm of backwards tapes and sound effects. 'Into The future But Not Into The Past' begins with chatter and another spoken word piece (which may well be Carl Sagan?) before turning into a medieval sounding, gorgeous piece of acoustic reverie. The guitars sound not unlike harpsichords in their shimmering and glistening beauty as wind chimes gently add atmosphere and a quiet eeriness. Final track 'Vanishing Point' ups the tempo, intense acoustic strumming underlying an acid guitar freak out of quite epic proportions. It is a suitably dramatic and poignant end to what is clearly a labour of love for Griffin and what for us listeners is quite simply a hugely enjoyable, unpredictable and successful prog folk classic.

Released in a lovely handmade sleeve featuring a medieval print, this album is only available in limited quantities so do not miss out. Griffin has released an opus that stands shoulder to shoulder with Yes, Oldfield, Fripp et al. Dig out your wizard's hat and cloak, light a joss stick and close your eyes as you journey with the Ranger and the Cleric.