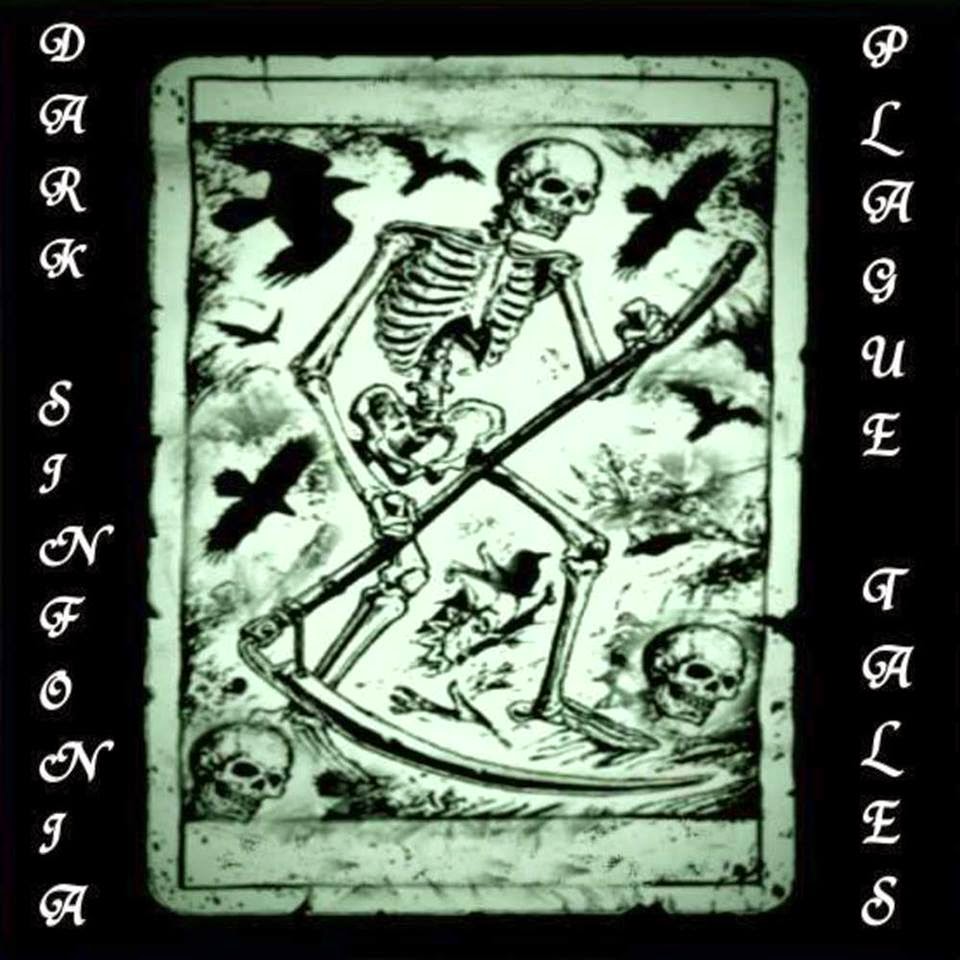 Dark Sinfonia, (Fear Incorporated and Voodoo Bible's William Westwater and Stephen Curran from Sensory Savage) unveil an album both utterly contagious and terrifying in 'Plague Tales'. An ambitious, unique and truly unsettling work, this is essentially a concept album about The Black Death; a sinister song suite that incorporates electronica, experimentalism, dark psych and folk with a healthy (or sickly) dose of sophisticated gothic drama.

Opener 'A Murderous Breath' is a bewitching medieval stomp, Westwater's evocative and occasionally disturbing vocals adding tension and dynamism, his voice recalling that of Peter Hammill, Bauhaus’s Peter Murphy and modern day Scott Walker. Electronics underpin his snarls and choral flourishes, a funereal drumbeat keeping time. Next, 'Black Death' is propelled along on the sound of a solitary snare, organ and percussion gradually joining to add layer upon layer of atmosphere and dread. Fans of the dark dramatics of The Virgin Prunes and The Tiger Lillies will adore this. ‘Prospero’s bleak brass and medieval woodwind is framed by Westwater's versatile and operatic performance; make no mistake this music with heart, albeit a coal black one. 'Krampus', a musical telling of the European myth of Christmas devils who steal children who have been naughty, is truly eerie; a sinister hurdy gurdy refrain and tolling bell adding suitable hallucinatory menace and backing. However, whilst genuinely creepy, there is also a playful element to Dark Sinfonia, a cackling black humour that revels in the absurdity of life and death.

'Stretch Out Thy Hand’ opens with the sound of chimes, bells and Westwater's whispering, deranged vocals to great effect; this is not an album to play alone or in the dark. The bells ring out, overlapping until...silence. 'A Wraith Rose' begins with the children’s nursery rhyme 'Ring A Ring A Roses', said to be inspired by the plague and the idea popular at the time that the very air and the noxious smells it carried was the source of the disease. The song itself is a twisted reflection of said nursery rhyme, an inverse chant that reeks of Middle Ages menace and doom. 'Hell's Executioner' is a bodhran and drum led anthem, curiously uplifting and invigorating despite the blacker than black subject matter. 'Bring Out Your Dead' s disquieting plainsong and undertaker’s bell merge with the repeated cry of the song title; again this has a sinister nursery rhyme quality to it. The traditional 'The Weaver's Bonny' is a revelation, its folky choral intro and celtic pipes a reminder that one half of Dark Sinfonia reside in the Lothians in Scotland which was itself greatly touched by the plague on several occasions. A series of nine questions and riddles reportedly asked by the devil himself, the track is an album highlight and is a hugely accomplished piece of modern dark folk. ‘Within This Silken Fur' follows, gorgeously gothically tinged chamber music providing the perfect accompaniment to Westwater's passionate and emotive performance. Ending in an echoing choir of despair, this is a series of hair on the back of the neck moments. ‘Dark Sinfonia', a whimsical and unsettling organ waltz, offers a musical interlude (and there is something of a musical play, something theatrical about this album) before 'The Red Death' is proclaimed by discordant bells and woodwind. Here, Westwater dispassionately recounts the effects of the pestilence; the effect is mesmerizing. This is not background music, to listen to whilst performing mundane chores; this is a performance that demands your complete and rapt attention and terror. The album closes with an alternate version of 'Stretch Out Thy Hand', a ghostly female soprano drifting under foreboding drones and Westwater's driven and dramatized vocals. Recalling Current 93's 'The Starres Are Marching Home' or some of their more haunted work with Steven Stapleton, this is a fitting end to an epic and hugely successful recording.

Pitch black, carnivalesque and sounding unlike anything else you will ever hear, you are highly advised to don your plague mask, gather your nosegays and enter the underworld of Dark Sinfonia. You will not regret it.

Released on the splendid Reverb Worship label in strictly limited quantities in a beautiful, handmade sleeve featuring torn and pasted front panels. Each CD comes with either a full colour badge or a sticker which features the cover artwork and, during the first month of release, each buyer of the CD directly from the label will be entered into a draw to win one of two specially commissioned t-shirts (large size) featuring the cover artwork. Order here.