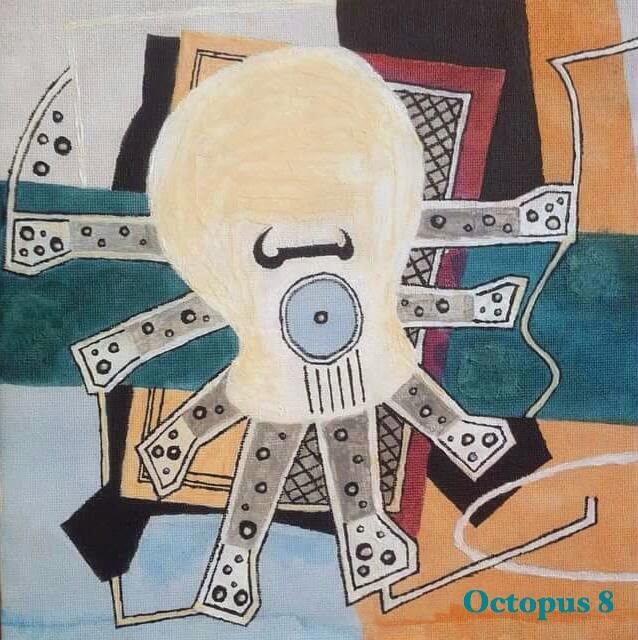 Adam Leonard's lengthy and exhausting rarities trawl comes to an end with "Octopus Part 8". For those who haven't been keeping up, the "Octopus" series has seen him release an eight track E.P of rare and unreleased material every month, for the last eight months. "I've saved the best 'til last" Leonard boldly claims, and that sure is saying something. I reviewed the first couple of volumes on their release and they were more often than not outstanding.

What to expect then? Readers who regularly check out our samplers (number 29 in this case) will already be familiar with the terrifying post-punk drone of "Elbow of Termites", in which Leonard seems unable to decide whether he is Robyn Hitchcock or Dave Brock - rarely has an identity crisis sounded so good! Elsewhere his version of the Beatles' "Good Morning, Good Morning" is a noisy beast with an odd far-away sound which makes it sound like that annoying neighbor who decides to blast their stereo at 6 a.m. Only, that neighbor has suddenly developed immaculate taste, so you really don't mind. More often than not though, this is acoustic based, taking in everything from subversions of traditional folk form (a hypnotic radio session version of "Nature Recordings" highlight "The Eighth Tower"),to quirky pop ("Napolean").

He's unfairly adept at all of these styles, and defies both logic, and conventional form in his ability to construct a convincing, detailed tapestry from materials which should result in a patchwork outcome at best. I'm not sure if I'd agree with the 'best 'til last' statement - that would suggest weaknesses earlier on that just aren't there - but there's certainly no signs of a quality drop.

"Octopus Part 8" can be had for free / name your price right here, but only for a month, after which it will revert to £4.00 - still a bargain for a feast such as this. And keep an eye out for the debut release from Invaderband, Leonard's new quartet, who are making music that he is confident enough to call "the best thing I've ever done". Here at the Active Listener, we're looking forward to hearing if he's right - the early stirrings that we've heard are pretty flash.