Nine Questions with The Holy See 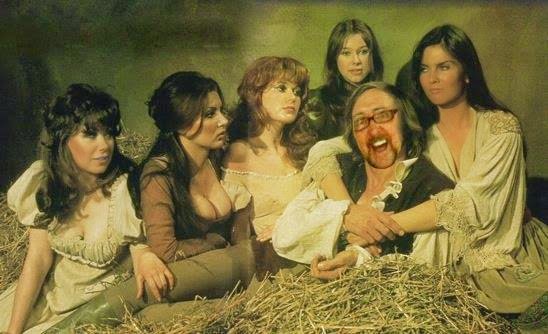 What was the first record you bought?
First record I ever owned was Slade in Flame, which I got with a portable record player for my birthday. First record I ever nicked was Star Wars And Other Space Themes, from Blackburn Chemist's "Music For Pleasure" album rack when I was a skint wee urchin, and first record I ever bought was Special Brew by Bad Manners which I bought off my big brother's pal for two roll ups.

What was the last record you bought?
"Transmission From Sogmore's Garden" by Magic Bus, a spaced out psychedelic feast of sounds for your ears, your mind and your soul. The next last records I'll probably buy will be Corduroy's new album in March (yay! ) and Cranium Pie's new 4 album epic Mechanisms 2 (yay again!).

What's one thing about you that very few people know?
My real birth name.

If you could record with any one artist who would it be and why?
As a teenager I was convinced that sooner or later I'd be Siouxsie and the Banshees next ex-guitarist, learned to play guitar by playing along with their records and everything, so if they re-form I'll send them a tape. Steve Severin lives not far from here so I'll make sure it gets there and shout through his letterbox til he listens to it. For my own music I'd love Cyrus Faryar to do some voice like he did on The Zodiac's Cosmic Sounds album. He lives on a remote island off New Zealand, not far from you. Fancy giving him a shout???

Who should we be listening to right now?
Whoever makes your hips shake, your heart sing, or your head fed. Not Kanye West though, he's a cock.

Vinyl, CD or digital?
All of the above, and live music too. It's all well and good being a vinyl junkie, but I don't have that portable record player anymore, and it's hard going wheeling my hi-fi onto the train to listen to sounds when I'm out and about, so I keep all my sounds on an mp3 player and will just have to suffer the indignity if any people who listen to vinyl catch me. As long as the music is traveling from the musician's head into yours it's all good.

Tell us about your latest release.
It's the soundtrack to a TV show, a supernatural detective series from 1969 which was broadcast from another dimension. It has Harpsichords and Mellotrons and Hammond grooves and synthesizers and sitars and tape loops and radiophonic interludes and lots of echoes. Echoes are good fun, I like those.

What's next for you, musically?
The Holy See is my main thing, but I'm also recording and gigging with a couple of my friends bands, and long distance recording collaborations with musical friends all over the place. I've got my fingers in more pies than Jimmy Savile partying at the City Morgue, so am furiously trying to grow some extra fingers. But right now the Holy See have just been signed to Cineploit Records so will be working on some more soundtracks, and hopefully some more collaborations with other people, who knows???

What's for dinner?
Think I'll have another slice of that Cranium Pie, it's affy good. Why do I keep saying the word pie? I even heard somebody in a car calling me a pie this morning. "Oot ma road ya pie!" What's that all about?