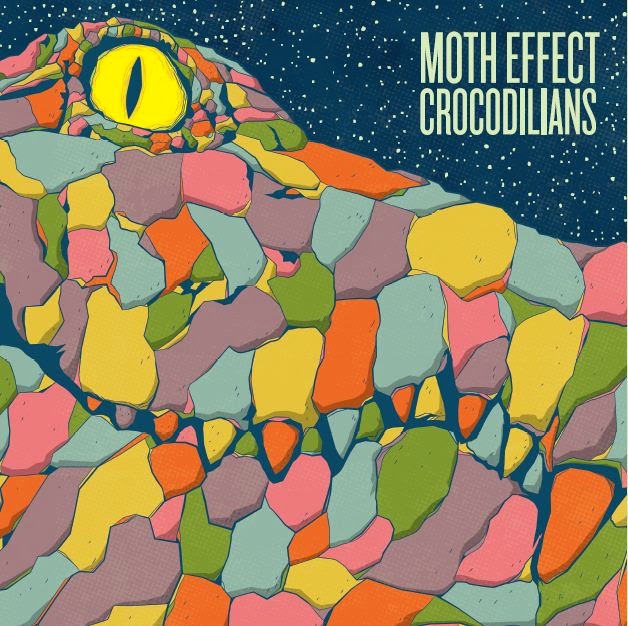 This March, Sunstone Records will release Moth Effect’s latest, "Crocodilians". For those unfamiliar, Moth Effect is a Sussex, UK-based instrumental solo-project that spans any number of genres, blurring the lines and producing something riveting and new; most notably, you can pull out influences from Krautrock, 60’s/70’s garage and psychedelic, as well as post-punk, shoegaze and 90’s-era electronica, but it all coalesces seamlessly. While much of this record is a slow-build – as you can probably guess from the influences tagged: awash in layers of ambience and reverb – I’d be remiss to not point out that every track still wants you to move; even at its most exploratory moments, "Crocodilians" is highly dance-able, a value that is sometimes dismissed – or worse, overlooked.

Opener, "Look Nicely", makes use of a repeating bass line and constant bass drum throb that in other hands might be misunderstood as a very familiar and predictable riff, but, here, it’s used as a necessary anchor to an otherwise otherworldly build. Its groove is well-paced and hypnotic, naturally incorporating new and interesting sounds across its full five minutes: a SONAR-like whirr seems to continually search the space. Yet there’s that constant beat that pushes the song forward.

"Ninety-Nine Seems Fine" builds upon a clip of warbling synths which recall Kraftwerk’s "Tour de France Soundtracks" or Cluster’s "Zuckerzeit", but the eventual goal is one of the album’s most organic tracks as it turns towards the dissonant post-rock from earlier this millennium as a touchstone, proving that a diversified sound can still feel cohesive. Similarly "Sleepless & Beatless", "Crocodilians"’ closing track, is a slow – slower than the others – send-off. It’s a quiet exit that both reiterates the album’s strengths and atmospheric feats while tapping into a new branch of Moth Effect’s expansive palette, channeling 70’s-era soundtracks and Stars of the Lid brand post-rock.

Musicians inhabiting the same world as Moth Effect sometimes seem to get lost in the instrument or instruments at their disposal (or just a few processing/recording tricks), but Moth Effect shows immense control and expertise, leaving space when there needs to be space and piling on the sound when there ought to be mountains of eeriness. Since 2009, Moth Effect has been visiting Earth now and then, long enough to deliver more sound artifacts from the deep reaches of space.

More information about Moth Effect and Crocodilians can be found here.
http://www.sunstonerecords.co.uk/moth-effect/