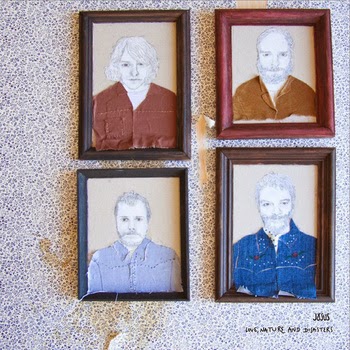 Factually I can't tell you much about Spanish band Jysus. Their LP "Love, Nature & Disasters" arrived in the post out of the blue with a brief press release linking band members to Wild Honey, Hollywood Sinners and Gamonides - none of which I've heard of over on the other side of the world here in New Zealand. So not much to go on then, but on an album like this, the music is more than capable of speaking for itself.

Jysus prove once again, that the best Cosmic American music of the last twenty years or so is being made outside of the U.S.A. An innovative, dynamic rearrangement of Paul Simon's "Flowers Never Bend With The Rainfall" is likely to be the drawcard for many listeners here, but those that stick around will find eight originals that maintain a very high standard indeed.

Like others with a similar mindset (Beachwood Sparks and Kontiki spring to mind), Jysus use lessons learnt from the Byrds as a launching pad rather than a template. "The Darkest Wine" is a good example of this; starting with moody, minor key jangle which sounds like it's been lifted straight from the first side of "Dr Byrds & Mr Hyde", it's soon elevated by peals of fluent, echo-laden guitar with a distinctly contemporary edge. There's plenty of twang too, with the Tex Mex flavoured "El Perro" being a right irresistible knees-up. But jangly folk-rock is the dominant sound, and these lads do it well, whether they're focusing on the moody minor-key stuff or upbeat shuffles.

Available digitally, or on vinyl here: