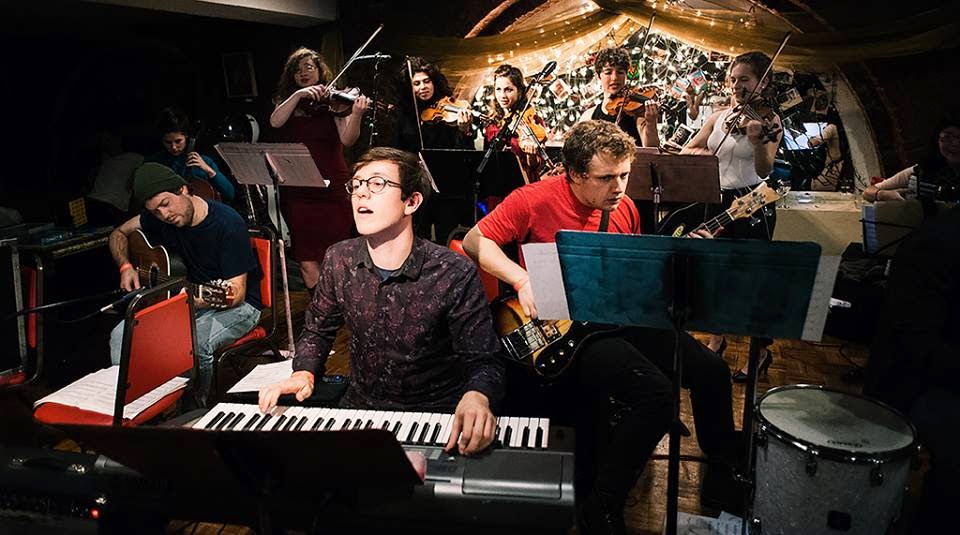 What was the first record you bought?
Very good question. My first CD? Definitely the Backstreet Boys when I was in primary school. First LP? My recollection is very hazy, but I want to say it was something by Esquivel - perhaps "Other Worlds Other Sounds." I usually tend to buy records that aren't available in any other format, which usually means whichever long-lost exotica records I could ever dig up. "Los Chavales De Espana" comes to mind. Or it could have been any of the myriad Herb Alpert records that are so easily attainable at various thrift stores across the country - which is where I began my first forays into the magical world of vinyl.

What was the last record you bought?
I'll describe my most recent haul: On vinyl, the soundtrack to one of my favorite films produced by Roger Corman - "Eating Raoul", very, very silly stuff. On CD I recently got a hold of the soundtrack to "So Sweet… So Perverse" by Riz Ortolani, and a collection of music from the "Gamma 1 Quadrilogy", - Four low-budget Italian outer space horror movies directed by Antonio Margheriti. A lot like Herrmann's soundtrack for "The Day The Earth Stood Still" but more… Itallo? Great stuff all around.

What's one thing about you that very few people know?
The most interesting thing that almost no one knows is that I have a very small hole above my right ear - according to scientists, it's an evolutionary anomaly which occurs in some people, inexplicably left over from one of human's oldest ancestors - the fish! Apparently there's a point in the human fetal development during which we have two small holes on either side of our heads which eventually disappear, but one of mine didn't for some reason. Besides that, I'm also an amateur smut connoisseur. Not a lot of people know that either.

If you could record with any one artist who would it be and why?
Burt Bacharach all the way. I'm completely in awe of the production of many Bacharach produced recordings from the 60s and 70s, and I would give anything to have been a fly on the wall for many of those recording sessions. Serge Gainsbourg also - what I would give to see what it was like to make "The Ballad of Melody Nelson"! Oy!

Who should we be listening to right now?
Is it too straightforword to suggest Ennio Morricone? I can't think who's work deserves more attention than his. Also the Rotary Connection and Bob Crewe's soundtrack to "Barbarella".

Vinyl, CD or digital?
You know, I feel like the discussion regarding which of these mediums is best is a little moot in this day and age. Sure, vinyl records are capable of sounding the best - but honestly I'm willing to make some small sacrifices in fidelity in favor of accessibility! For instance, I certainly would have a hard time getting my mitts on a collection of music from Italian space movies if I was an LP purist! And thanks to the internet I have access to almost every Morricone score ever written! Sure, they're in MP3 format, but who would I be to turn up my nose at something like that? As an active participant in the quest to find out about as much music as possible, I'll take it in whatever form it comes!

Tell us about your latest release.
February has been kind to Tredici Bacci - this month we look forward to our second release on cassette (speaking of the hierarchy of fidelity) which is a split between TB called "Vai! Vai! Vai!" and ENPSE (The Ensemble for the Exploration of New Possibilities of collective Sound Exploration) and somewhat tongue-in-cheek homage to the Gruppo Nuova Consonanza (An improvisation collective, of which Morricone was a member), featuring many of the musicians from TB improvising their hearts out. Equally as exciting is the re-release of our first cassette onto 180 gram vinyl - "The Thirteen Kisses LP"!

What's next for you, musically?
Ah, if only I really could be sure. It is my hope to make another Tredici Bacci record, this one featuring a slew of guest vocalists - an homage to the many "Title Track" songs composed by the Italian soundtrack all-stars and sung by various pop icons! Think Mina or Adriano Celentano (personnel to be announced within the next couple of months). However this is in the very early stages - I plan on keeping my nose to the grindstone for quite some time.

What's for dinner?
Quesadillas, baby! I'm going to be candid and say that I eat the exact same meal every day - Eggs and toast for breakfast and a quesadilla with cheese, black beans, lettuce and nutritional yeast for dinner, plus 5-7 cups of coffee - it's a way of saving what little money I have for future musical projects! That and I like the flavors.