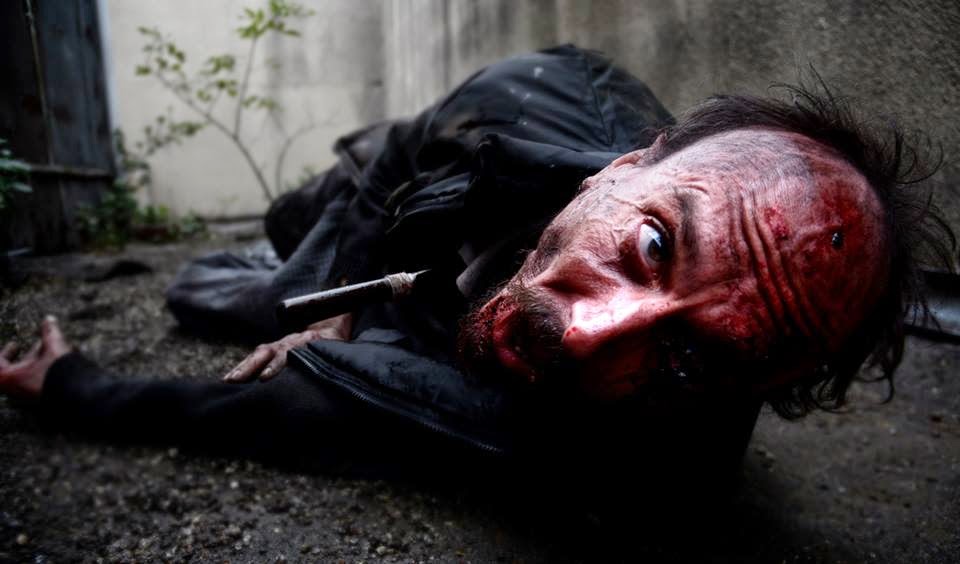 What was the first record you bought?
It was Appetite for Destruction by Guns and Roses when it was first released on tape. I used to have it playing in my old Morris Marina while I was cruising the countryside. It's hard to remember how massive that record was at the time. It's still damn brilliant.

What was the last record you bought?
Albino Father - II. I got into Albino Father when they released AGE. I think I discovered it through Bill at THE SODA SHOP. They are pretty big on Doom but Albino Father straddle over into Garage and do some fine tunes.

What's one thing about you that very few people know?
I'm an award winning horror actor. :) A few years back I did a short film called BELLY OF THE WOLF and it's won several awards, including the British Horror Award in 2013. I got to go to the Empire at Leicester Square in London and see it screened. I landed the part from being in a band at a friend's wedding. I was very drunk, dressed as Keith Richards. The director was there and he said at that point that he knew I'd be up for the film, but his wife made him wait till the next day before he asked me.

If you could record with any one artist who would it be and why?
Bobby Hecksher from the Warlocks. There's been some cross pollination already. I've met him a couple of times and he adapted one of my tunes and stuck it on one of his albums. That's all I'm saying about that... I'm pretty chuffed and anyone that knows my old work should have worked that out already. He's a nice guy and I love his new album Skull Lover. It was great to see him back in London last year on his birthday. It's been difficult for him over the last few years, a bit like me.

Who should we be listening to right now?
My friends THE BARON FOUR. They made a great album last year.

Vinyl, CD or digital?
CD... I love packaging but I don't like scratchy vinyl. MP3's serve a purpose but I can hear the frequency cut offs. You're better off with FLAC but not too many gadgets support playing FLAC. It's a bummer.

Tell us about your latest release.
I released WAY OUT this year. It's an 11 track album of Psych, Garage and Blues. There's a lot of fuzz on it. I've been hand building fuzzes, so they all got on the record. That, and my tendon problems have eased a bit so there's more guitar on it than ATROPHE. The big blues tune "WHEN THE DEVIL COMES" is just a guitar / keyboard / bass solo war.  I grew up playing blues bass so a blues revival is not a big surprise, it's always been there like rock and roll, it just sneaks out every now and then. I really like the garage on the record, stupid little riffs played loud hahaha.... Chris taught me that.

What's next for you, musically?
I'm starting a garage funk band... I'm not saying anymore at the minute but it's sounding really good.

What's for dinner?
Curry... I may put the ghost chilli's in. I'm feeling brave.